Although the lady butterflies of the genus Vanessa are not as familiar or as well-studied as the Monarch (Danaus plexippus), their behavior and migration are likewise well worth observing. Much remains to be discovered about their habits and how their behavior and seasonal distribution varies by geographic location. Observers and experimenters ranging from casual to serious can discover new and valuable information about these butterflies. The list above links to more detailed information, including summaries of published findings and methods for observing these fascinating butterflies.

This site was most recently updated on November 7, 2022.

All links to images on our site have been restored.  Links had been broken for the past several weeks as a consequence of switching the site to a different server.

We have a new mapping platform for our interactive map - Leaflet.  Leaflet is based on Open Street Map and was created by Volodymyr Agafonkin, a Ukrainian citizen from Kyiv.  More information about Leaflet can be found here.  The available map formats include a street map and a terrain map, with the terrain map as the default setting.

A southward Painted Lady migration has been underway in central Iowa for at least the past three days. After a summer with none observed here, a few appeared in late August into mid-September, and then recently, larger numbers arrived after September 21. Although most have been spotted nectaring, several have been seen flying southward after the passage of a cool front on September 24. As of today, September 26, winds continue blowing from northerly directions, carrying Painted Ladies southward at heights of from 5 to 10 meters/15 to 30 feet.

I've received an e-mail from a friend who was wondering when Red Admirals would be arriving in the upper Midwest this spring.  He had not seen any postings of that species on the Wisconsin Butterflies recent sightings page, or on iNaturalist, and asked me how unusual it is to not see Red Admirals this far into the season.

The first Red Admirals in central Iowa have been later than average this year (the average arrival time here is in mid-April, but the first one can arrive as early as late March to as late as mid-May).  There have been several possible reasons for this:

1) It has been a generally cold spring until now.
2) Whenever there were warmer temperatures above 60 F with southerly winds, the air was very dry.  They prefer not only warmth and winds from the south, but also sufficient humidity, with dew points above 55 F.
3) The jet stream for the last few weeks was passing from central Texas through Mississippi, Alabama, and Georgia and then into South Carolina.  This pattern kept the warm, humid Gulf air well to our south, and brought several weeks of rainy, stormy weather to those states while we in the upper Midwest stayed unusually dry.

All three of these factors changed yesterday, April 26.  A loop in the jet stream moved northward, which allowed southerly surface winds to bring warm, moist air into our area.  Not only did the temperature rise rapidly into the low 80s, but the dew point also gradually rose from 41 F before sunrise to 56 F in mid-afternoon.  So yesterday was the first day this year that was favorable for Red Admirals in our area to be active and to migrate.

This spring I've been out checking the Iowa State University campus for Red Admirals each sunny or partly sunny afternoon above 60 F since late March, without finding any.  Likewise, there were none on April 25 - it was still too cool and dry.  But when I went there yesterday, I found the first one of the season, perching on and patrolling around the sunny west wall of Catt Hall.  It was a pleasant surprise, but one also anticipated due to the favorable conditions.  Now, as spring continues and  the weather becomes more favorable, we can expect more Red Admirals to be arriving in the upper Midwest.

Also note the dry line running from southwest Texas to western Kansas.  Here the moist air from the Gulf of Mexico meets dry air from the desert southwestern states.  Thus this line is likely to be the farthest possible western extent of any ongoing Red Admiral migration at this time.  The dry line is also notorious for spawning severe thunderstorms and tornadoes along the moist side of the line.

This event has the potential to trigger a bloom of desert annuals in the southwestern United States, perhaps followed by an outbreak of Painted Ladies by early March.  This depends on whether enough of the heavy rainfall predicted for the coastal regions of southern California on Friday, January 29 crosses the San Jacinto Mountains to substantially water the deserts to the east.

From the U.S. National Weather Service on January 28:

An ongoing heavy precipitation event continues to unfold across central and southern California this afternoon as an atmospheric river swings through the region. Up to 12 inches of rain has already fallen along coastal areas, with more than 4 feet of snow across the central Sierra Nevada. The focus for heavy rain going into tonight will shift to coastal sections of southern California. Up to 3 inches of rain is expected to fall here, with locally higher amounts. Flash flooding and debris flows will be possible near recent burn scars, as soil cannot retain much rain in a short amount of time. Flash Flood Watches are currently in effect.  Meanwhile, heavy snow is expected to continue through Friday morning across the central and southern Sierra Nevada. A widespread additional 1 to 3 feet of snow can be expected, making travel extremely dangerous and impossible at times.

If not for this atmospheric river, 2021 would probably not have been a potential year for an extensive Painted Lady outbreak.  The Pacific Southern Oscillation is currently in a strong La Niña phase, which brings sinking air and dry conditions to the southwestern deserts:

La Niña—the cool phase of the El Niño-Southern Oscillation climate pattern—was firmly in place across the tropical Pacific in December 2020. Forecasters estimate a 95% chance La Niña will last through Northern Hemisphere winter. La Niña can influence seasonal climate in the United States. Conditions so far have not looked especially La Niña-like, but winter is far from over.

The atmospheric river itself is impressive - appearing on satellite photos as a curving loop of clouds extending from east of Hawaii across the Pacific into central California, then continuing northeastward into eastern Washington, southeastern British Columbia, and southern Alberta.  The leading edge of the loop is forecast to move eastward over the next 24 to 48 hours, which will bring the potential for rainfall to southern California and Arizona.  The loop itself is propelled by circulation around a strong low-pressure system that has been spinning to the west of the Oregon/Washington coast for the past three days.

Events such as this one suggest the potential for Painted Lady outbreaks to be triggered even during years which would otherwise not be favorable for them to occur.  Will there actually be a large outbreak this year?  Observers in California and the Southwest, please keep watching for Painted Ladies, and let us know what you see! 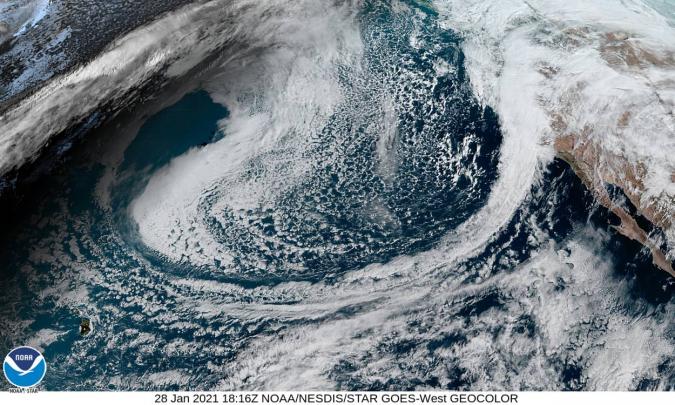 Fresh Painted Ladies have been proliferating in Nebraska since about July 18, suggesting a recent mass emergence. This outbreak has been most closely monitored in the eastern part of the state, but large numbers have been observed throughout Nebraska. Meanwhile, here in central Iowa, 150 miles/240 km to the east, only a few have occasionally been spotted in the past several weeks. Will they eventually arrive here, and if so, when? I keep watching the skies for migrants and the flowers for many sudden arrivals, but so far, I've seen almost none.

Almost none, because this afternoon I spotted a single Painted Lady, the first I had seen in just over three weeks. It was nectaring - or trying to nectar - in our small prairie patch on the Iowa State University campus, but wasn't having much luck because a particularly aggressive and persistent Monarch chased it several times and drove it away. So I have an observation, but no photo to accompany it.

Shortly after seeing the butterfly, I realized that the weather was turning warmer and more humid, and the wind was increasing from the south. Could this type of weather change suggest that Painted Ladies might arrive soon, riding the wind from some source region somewhere to the south? Or will Painted Ladies arrive here simply by expanding eastward from what may be a source region in Nebraska?

Because migrating butterflies often take advantage of winds blowing toward the direction to which they are inclined to go, wind flow patterns often reveal the course of a migration. The mid-day wind flow patterns from EarthWindMap on July 17 and 18th showed widespread southerly wind flow across western Iowa and eastern Nebraska on the 17th, and across eastern Nebraska through all of Iowa on the 18th. If the Painted Ladies had come from a widespread area somewhere to the south or south-southwest, one would have expected a strong front of arrivals in both states at about the same time. The current pattern of abundance suggests possibly a more localized irruption or a wind-borne migration from a relatively small source region. Observing flight and wind directions, looking at relative butterfly abundance in different locations over time, and examining patterns of daytime ground clutter on radar maps may provide helpful information about how this irruption develops and spreads.