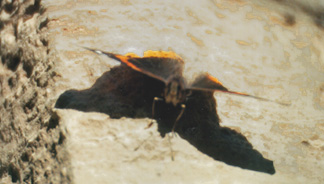 The territorial behavior of the Red Admiral (Vanessa atalanta) has been documented by a number of observers in the United States and Europe in the following locations: USA: California (Shields, 1967); Iowa: (Bitzer and Shaw, 1979, 1995); Florida (Swanson, 1979); Arizona (Brown and Alcock, 1991). Great Britain: Berkshire (Wiltshire, 1997). The behavior and activity schedules of these and other V. atalanta populations seem to differ from place to place. If so, how do such differences persist in a species which is so cosmopolitan, free-ranging, and migratory?

Why do some butterflies defend territories? The ultimate reason is to find mates.

Territorial behavior is a type of perching behavior in which the occupant defends his perch from other males of his own species. The question of whether some butterflies are "truly" territorial or are approaching other butterflies merely to identify their species and sex has been controversial (Scott, 1974; Suzuki, 1976), but there are ways to observe interactions between perching butterflies and incoming intruders to find out with a reasonable degree of certainty whether or not these are true territorial contests (e.g., Rosenberg and Enquist, 1991). It probably should not be assumed that a particular species or population of perching butterflies is actually "territorial" until a number of interactions have been carefully observed.

Some of the lady butterflies of the genus Vanessa, including V. atalanta, are perching or territorial (Shields, 1967; Dimock, 1978; Swanson, 1979; Bitzer and Shaw, 1979; Alcock, 1984; Opler and Krizek, 1984; Brown and Alcock, 1991). Bitzer and Shaw (1979) and Swanson (1979) have described the territorial behavior of V. atalanta. As is typical for the perching period of Vanessa sp. generally (Opler and Krizek, 1984), V. atalanta males hold territories from mid to late afternoon to around sunset. Different males consistently occupy the same territories on different afternoons and even from year to year. The territories themselves are roughly elliptical in shape, varying from 8 to 24 m long and 4 to 13 m wide. They are typically located in small open spots within a ring of trees which is open to sunlight on the west side, or on west-facing walls or embankments flanked by a partial circle of trees. Their major axes often are oriented toward or lie along linear visual features such as sidewalks, trails, and rows of trees. Each territory has a core area, an area common to a territory mapped on successive days. The area peripheral to the core area sometimes varies with different territorial occupants.

Some territories contain one to several frequently-used resting spots within their core areas. Many occupants consistently perch upon the same spots, which are usually on the ground (sidewalks, rocks, or patches of bare sunlit ground), on sunlit walls of buildings, or, less often, on a bush or low branch of a tree.

V. atalanta males define their territorial boundaries by patrolling within their territories ca. 7 to 30 times/h (Bitzer and Shaw, 1979). During a single patrol, a male traces a flight path two to six times in a period of 5 to 60 s before returning to his perch. They usually patrol about 1.5 m above the ground, or may patrol along or up and down walls in a winding fashion.

Territory occupants defend their territories by trying to out-fly and out-maneuver intruders and so drive them away (Fig. 1). Interaction frequency ranges from less than one to over 100/h, but is commonly between 10 and 15/h (Bitzer and Shaw, 1979). Intruders typically enter a territory along specific flight routes, flying from 0.30-1.70 m above the ground. The resting or patrolling occupant then flies up or changes course, rushes at the intruder from underneath, and sometimes hovers above the intruder for 1 to 2 s before chasing it along an erratic path 1-2 m above the ground for 3 to 20 s. Then the occupant closes to within 30 cm of the other and begins chasing it along one to seven turns of a helical path, 4-9 m in diameter, ascending 10 to 18 m to treetop level. The occupant then drives the intruder over the treetops, breaks off the chase, and drops back into its territory (Bitzer and Shaw, 1979). This helical flight allows the occupant to chase intruders a relatively great distance upward without moving a large horizontal distance from its territory. If a third butterfly attempts to usurp the territory, the occupant often breaks off the chase and drops down to intercept the new intruder. At the same time, the first intruder may become disoriented in the overhead branches and lose sight of the territory.

Some territories are considered more preferred or optimal than others because they are occupied more frequently from day to day. The highest rates of occupant-intruder interactions occur in optimal territories. Such competition sometimes results in two or more males claiming the same territory. When more than one butterfly rests in a territory, any occupant which flies up, presumably while attempting to patrol, is immediately chased by another occupant. The results of such competition can be 1) establishment of an adjacent territory; 2) splitting of a territory into two smaller territories; 3) intermittent chases occur until all butterflies fly away at the end of the territorial period; 4) one or more butterflies are driven off, or 5) the smaller or smallest butterfly stealthily perches in an out-of-the-way location near the territorial boundary and flies up only in response to incoming intruders.